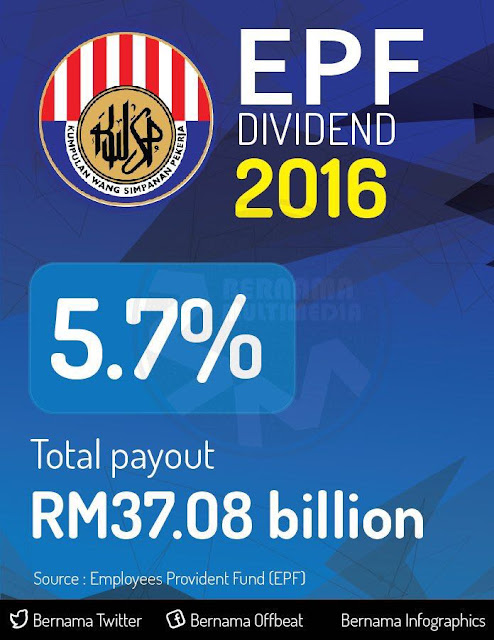 KUALA LUMPUR: The Employees Provident Fund (EPF) has declared a 5.7 per cent dividend for 2016, with a total payout of RM37.08bil.
Chairman Tan Sri Samsudin Osman said the EPF is pleased it has been able to consistently exceed its two strategic investment targets of at least 2.5 per cent nominal dividend on a yearly basis and at least 2.0 per cent real dividend on a rolling three-year basis.
In 2015, the EPF declared a 6.4 per cent dividend.
"As a retirement savings fund, the EPF always emphasises the sustainability of returns over the long term horizon as opposed to short-term gains.
"This is a commendable achievement in view of the much tougher market environment. For 2016, the rolling three-year real dividend was 3.83 per cent, 183 basis points above the target," he added, in a statement here Saturday.
During the year, the EPF faced a challenging investment climate due to unsettling events such as Brexit and the US Presidential elections.
In retrospect, the EPF was operating on the back of slower global growth while navigating between changes in the monetary policies in major economies, the slump in crude oil prices, weaker domestic currency, and large-scale outflow of capital from emerging market economies to developed economies and safe haven currencies, said Samsudin.
"As the majority of world markets declined at the beginning of the year, the EPF's performance was also affected. However, we ramped up our profit-taking activities in the second quarter (Q2 2016) onwards to ensure that we met our strategic targets," he added.
The dividend payout for 2016 is higher than the payout amount in 2014 even though the dividend rate declared then was higher at 6.75 per cent.
Samsudin said the payout amount required for one per cent dividend in 2016 was RM6.51bil, higher compared with RM5.43bil in 2014.
The payout amount required for every one per cent dividend rate has been growing at 9.5 per cent annually since 2001 in tandem with the growth of members' savings balance for the same period.
"It is worth mentioning that after the 2008 global financial crisis, the EPF distributed RM236.07bil in dividend to its members," Samsudin said.
The dividend payout was derived from total realised income after deducting the net impairment on financial assets, unrealised losses due to foreign exchange rate and derivative prices, investment expenses, operating expenditures, statutory charges as well as dividend on withdrawals.
Commenting on the economic climate in 2017, Samsudin said market volatility remains a concern as the real implications of Brexit and clear policy direction from the Trump-led administration have yet to unfold.
"Our diversification strategy has proved to serve us well throughout the years, especially during difficult times.
"Moving forward we will continue to increase our exposure to alternative investments, particularly in real estate and infrastructure, in line with our objective as a long-term investor to provide consistent returns for our members.
"This asset class also serves as a natural hedge against inflation," he said.
Beginning 2017, the EPF's performance results will be broken down by Conventional Savings and Syariah Savings for the quarterly and annual results announcement.
As at Dec 23, 2016, a total of 635,037 members had switched to Syariah Savings with RM59.03bil of the initial RM100bil fund allocation taken up.
Members can check their EPF account statement for the crediting of the 2016 dividend starting Feb 19, 2017, through i-Akaun via the myEPF website at www.kwsp.gov.my.
Alternatively, members can also obtain their statement at EPF kiosks or visit any EPF branches nationwide. - Bernama