Selamat Hari Merdeka to all my friend ^^
国庆日快乐！！！ 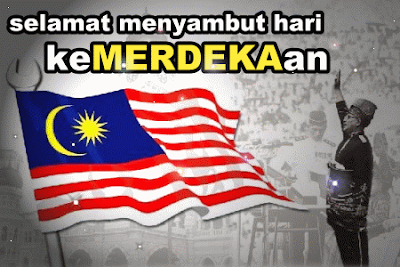 Malaysia is a federation of thirteen states in Southeast Asia. The country consists of two distinct geographical regions divided by the South China Sea.

Peninsular Malaysia (also Mainland or West Malaysia) lies on the Malay Peninsula, South of the border with Thailand and is connected by the Johor-Singapore Causeway and the Malaysia-Singapore Second Link (or Tuas Second Link) to the South with the island state of Singapore. The island of Penang (also connected by a bridge) is regarded as being part of mainland Malaysia.

Malaysian Borneo (or East Malaysia) occupies the northern part of the island of Borneo, bordering Indonesia and surrounding the Sultanate of Brunei. It consists of the states of Sabah and Sarawak and the federal territory (an island) of Labuan.

The name "Malaysia" was adopted in 1963 when the Federation of Malaya, Singapore, Sabah (formerly North Borneo) and Sarawak formed a 14-state federation. Singapore was expelled from the federation in 1965 and became an independent country.

Although politically dominated by the Malays, modern Malaysian society is heterogeneous, with substantial Chinese and Indian minorities. Malaysian politics have been noted for their allegedly communal nature – with each of the three major component parties of the Barisan Nasional restricting membership to those of one of the three ethnic groups. However, the only major intercommunal violence the country has seen since independence was the 13th May 1969 racial riots, which occurred in the wake of an election campaign that was dominated by racial issues.

Historically, modern Malaysia is actually made up of a number of states with very different backgrounds, traditions, peoples and cultures. The existence of nine Sultanates means nine separate Kingdoms, for a start.

Malacca apart (which was originally Portuguese, then Dutch) all the states in the federation are quintessentially "British" in many ways, although the traditions of India and in particular China are reflected in some of the older architecture, and the fact that Kedah, Perlis, Terengganu and Kelantan were originally part of Thailand does not escape the discerning eye.

The British established their first colony on the Malay peninsula in 1786, with the lease of the island of Penang to the British East India Company by the Sultan of Kedah. In 1824, the British took control of Malacca following the Anglo-Dutch Treaty of that year, which divided the Malaya archipelago between Britain and the Netherlands, with Malaya in the British zone.

In 1826, Britain established a Crown Colony which they called the Straits Settlements, which united its three possessions in Malaya: Penang, Malacca and Singapore. The Straits Settlements were administered by the East India Company in Calcutta until 1867, when they were transferred to the Colonial Office in London.

In the late 19th century, several Malay states decided to enlist British help in settling their internal conflicts. The commercial importance of tin mining in the Malay states to the merchants of the Straits Settlements led to British government intervention in the tin-producing states in the Malay Peninsula. British "gunboat diplomacy" was employed to bring about a peaceful resolution to civil disturbances caused by Chinese gangsters, and the Pangkor Treaty of 1874 paved the way for the expansion of British influence in Malaya.

By the turn of the 20th century the Sultanates of Pahang, Selangor, Perak, and Negeri Sembilan, known together as the Federated Malay States (not to be confused with the Federation of Malaya), were under the de facto control of the British Residents, appointed advisors to the Malay rulers. The British were "advisers" by name but in reality they were the puppetmasters, controlling the actions of the Malay rulers. The other states all accepted "advice" from the British, and eventually Residents were appointed.

On the island of Borneo, Sabah was governed as the Crown colony of British North Borneo (originally it was governed by a private company), while Sarawak was a gift from the Sultan of Brunei – given as a personal "thank you" to the Brooke family, who ruled as White Rajahs.

Following World War II when almost all of modern Malaysia was physically occupied by the Japanese, there was increasing popular support for independence. The British planned to form the Malayan Union and combine all the mainland states into a single Crown colony under one administration – a plan which faltered against strong opposition from the Malay rulers, amongst others, and because it would have given the Chinese community citizenship. The Union, created in 1946, was replaced in 1948 by the Federation of Malaya which embraced the 11 mainland states, but not Singapore.

The British also at the time had another problem on their hands, as the Communist Party of Malaya were engaging in a guerrilla war intended to eject the British and create a communist state on the peninsula. This problem started in 1948 and continued through to 1960, and meant that a significant number of British (and Commonwealth) troops were engaged on anti- and counter-insurgency measures in what was called the Malayan Emergency.

The author had the pleasure of working on one project in Malaysia on which the principal technical advisor was Major-General Sir Jeremy Moore, KCB, CB, OBE, MC, Land deputy to CINC Fleet and later Commander Land Forces Falkland Islands. During our times in Malaysia we had to travel "up country" on a number of occasions into areas in which Sir Jeremy, as a young officer, had been engaged in battles with the communist insurgents. His recollections of the time were that it was very "hair-raising" and that the locals said that the communist fighters were every bit as tenacious as the Japanese who had occupied the country only a few years earlier.

Against this backdrop, independence for the Federation (the nine mainland states) within the British Commonwealth was granted on 31st August 1957.

Anyone who has ever been in Malaysia at the time of National Day – or Merdeka Day – will know that the celebrations start weeks beforehand, as flags, banners, decorations and all manner of festival tableaux begin to be put into place.

The author has had the pleasure of spending a great deal of time in Malaysia, travelling to all parts and in his own way making a small contribution to the national good. He can vouch for the fact that the Malaysians, encouraged by the Government and state television and radio, celebrate enthusiastically.

The fact that Merdeka Day is celebrated on 31st August does cause some resentment in East Malaysia – Sabah and Sarawak – as they regard their independence as being the forming of Malaysia on 16th September 1963 and not the earlier date.

One unusual feature of Malaysia is the fact that they have a national King, selected by a quite unique method and which is determined by rota. Malaysia is a federal constitutional elective monarchy. The federal head of state of Malaysia is the Yang di-Pertuan Agong, commonly referred to as the King of Malaysia. The Yang di-Pertuan Agong is elected to a five-year term by rota from among the nine hereditary Sultans of the Malay states; the other four states, which have titular Governors, do not participate in the selection.

The 13th and current Yang di-Pertuan Agong is Sultan Mizan Zainal Abidin, the Sultan of Terengganu. His reign began on 13th December 2006.